The best books of the year:
poetry, stories and novels

Selected from both Chilean and foreign works, these are the best titles of the year, according to critics Patricia Espinosa of Rocinante, Camilo Marks and Antonio Avaria of the Revista de Libros, and journalists Marcelo Soto and Andrés Gómez of La Tercera.

Living in the United States for the last two decades, David Rosenmann-Taub (1927) is a reclusive poet, of whom little is known and who rarely allows interviews. Therefore, the publication of any work by him is a great event, and in this case it is an extraordinary book, “one of the best poetry books of recent times,” according to Camilo Marks.

El Mensajero (LOM) may not be perfect, but it scales the highest summits, such as the poem “Spell”: “Come down!: the crags announce the night,/ the tears tan the taste of sunset,/ the impetuses fight with bronze edgings,/ the trees release absurd sorrows”.

Rosenmann-Taub, who is also a pianist, writes in a Spanish which vibrates with life and is rich in allusions. His appearance on the literary map led Alone to declare: “A totally new star: an unrelenting intensity, a vehement vigor, and the power to elevate and poeticize even the most prosaic themes.” 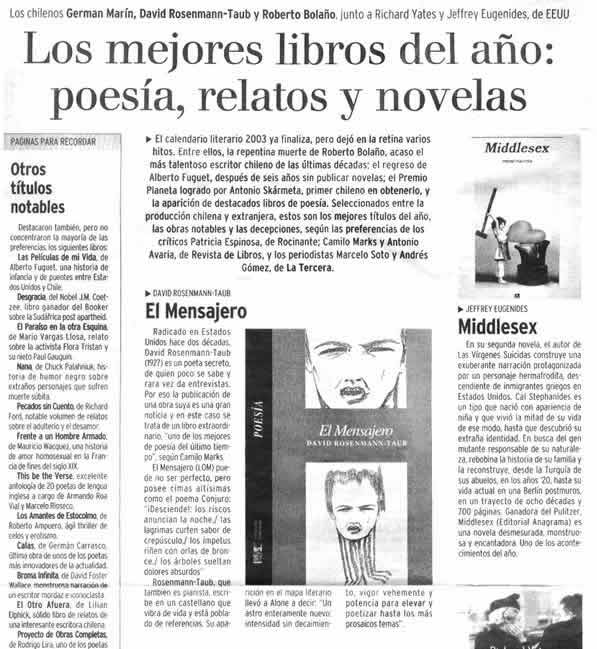