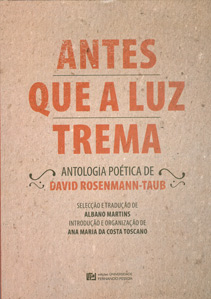 This bilingual anthology was published in Portugal by Edições Universidade Fernando Pessoa on June 12th 2013. Selection of the poems and translation in Portuguese: Albano Martins. Introduction: Ana María Toscano. The book was launched at the VII Congreso CEISAL in the Fernando Pessoa University in Porto.

“Rosenmann-Taub’s verses are like puff pastry: made of superposed layers, they crunch, crackle in the eyes; they sprout from a vanguardista seed, that is to say from a discomfort with being and with the world, which translates into a simultaneous discomfort with language and which aims to dissolve itself through its expression. Thus, they are searching, nonconformist, and daring but they do not renounce tradition: they actualize, invigorate that subversive spirit without neglecting the knowledge of the classics or of the conventional poetic forms, rather they endow them with a new meaning: in transforming them, they recreate them.”