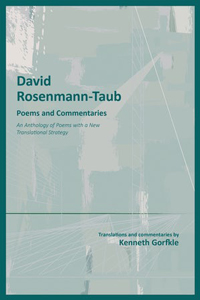 David Rosenmann-Taub: Poems and Commentaries breaks with conventional norms. Until now, nobody has undertaken a commented anthology of the poems of David Rosenmann-Taub except for the poet himself. In addition, although the Chilean poet has been publishing for seventy years, a broad understanding of his thematic preoccupations is still lacking. After formulating interpretative strategies to understand the poems, Kenneth Gorfkle developed his own approach to the expression and communication of that understanding: glosses that paraphrase the poems and thus express the totality of their substance. His selection of poems that illustrate the poet’s concerns give the reader a broad general vision of Rosenmann-Taub’s thought as well. Comprised of forty-four poems, each with its own gloss, the book is a tour de force for enthusiasts of Rosenmann-Taub’s work, academics dedicated to poetry at all levels, and poetry lovers in general.