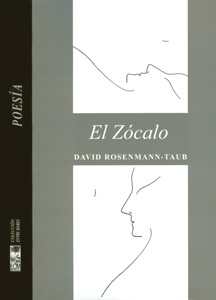 (Fourth edition of the first volume of Cortejo y Epinicio)

Cortejo y Epinicio is a tetralogy that David Rosenmann-Taub has written during the course of his whole life. When he created this work, his intention was to call the first volume El Zócalo. Nevertheless, the original publisher, in 1949, suggested to him to give it the name of the tetralogy.

For this fourth edition of the book, now that the other three volumes have been published — El Mensajero, La Opción, and La Noche Antes — the poet has given back its title to the first volume.